Canaccord Genuity analyst Michael Graham weighed in today with a few insights on Zillow Group Inc (NASDAQ:Z), after Trulia, which will merge with Zillow later this year, reported fourth-quarter results. The analyst reiterated a Buy rating on the stock, with a $125 price target, which implies an upside of 17% from current levels.

Graham said, “The numbers were somewhat soft, with agent growth and revenue missing expectations. However, the company also spent ~$10M less than expected on advertising, perhaps signaling greater potential savings for the combined Zillow Group going forward. In addition, ListHub scored a victory in its legal battle against Trulia, and will stop sending listings to both Trulia and Zillow in April. These issues (neither of which are structural in our view), along with market weakness, have pressured Zillow stock down closer to the $100 level where it has consistently found support over the past year. While the upcoming Q1 report and related 2015 guidance for the combined Zillow/Trulia could hold some “surprises” (primarily around agent growth expectations), we continue to expect 2016 to be a breakout year for Zillow’s monetization strategy, and reiterate our BUY rating.” 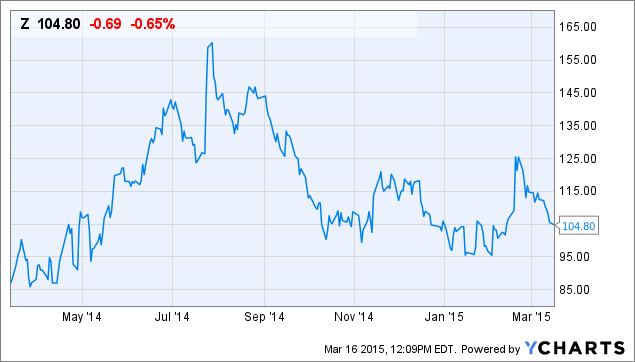