Canaccord Genuity analyst Neil Maruoka came out today with a research note on Oncolytics Biotech, Inc. (USA) (NASDAQ:ONCY), after the company released its fourth-quarter results, posting a net loss of $18.4 million or ($0.21) per share, lower than Maruoka's estimate of $20.6 million or ($0.24) per share due to lower R&D expenses.

Maruoka noted, "With increased liquidity, we expect that the ATM program should help alleviate balance sheet risk. Oncolytics reported cash and equivalents of $16.2 million at the end of the quarter, which increased to $27.5 million as of March 13, 2015. At current burn, we estimate that Oncolytics now has over 18 months of cash remaining."

Furthermore, "We anticipate a number of data announcements in the near term, including randomized Phase II data in both ovarian and colorectal cancers. We believe that a signal of efficacy (a strong trend on a primary efficacy endpoint or a clear impact in a sub-patient analysis) could renew investor confidence and put the stock back on track."

The analyst rates the stock a Buy, without suggesting a price target. 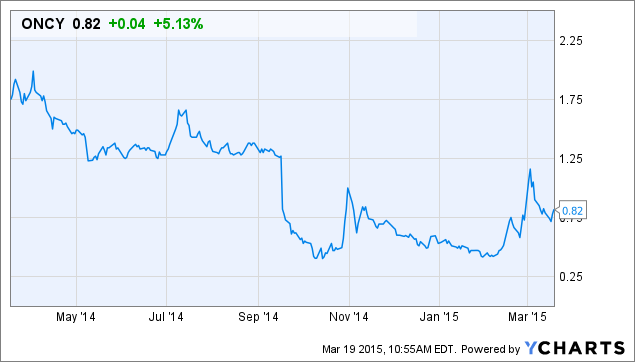