Canaccord Genuity analyst Tony Lesiak came out with his views on Yamana Gold Inc. (USA) (NYSE:AUY), after the company released its first-quarter results, posting adjusted earnings of $0.04 per share, below Lesiak’s estimate and consensus of breakeven. The analyst also reiterated a Buy rating on AUY with an $8 price target, which implies an upside of 111% from current levels.

Lesiak wrote, “The variance to our estimate is due largely to higher costs, particularly at Chapada (grade), Mercedes (dilution) and Jacobina (dilution), where costs in the quarter were well above annual run-rate guidance. Earnings were also affected by higher than expected G&A expense due to one-time head office reduction expenses. A turn-around at each of these assets is forecast later in 2015.”

The analyst concluded, “We continue to view Yamana as one of the strongest re-rating candidates for 2015 among the larger producers. The outlook for the core assets is improving for the remainder of the year with strong potential exploration catalysts (Ventura, Sucupira, Santa Cruz, Rodado). The Brio assets generated free cash flow at spot and are also showing some progress which could positively impact spin-out valuations (Q3).” 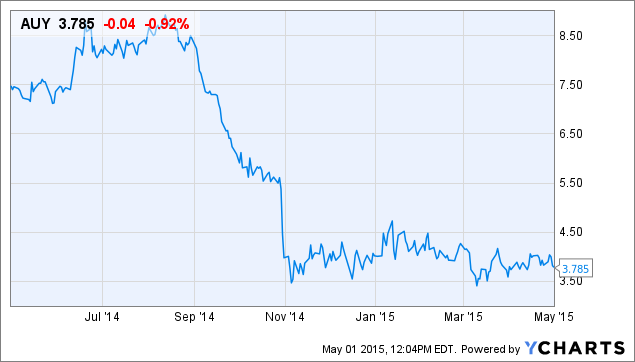