In a report published August 22, analyst Scott Van Winkle of Canaccord reiterated a Buy rating on Keurig Green Mountain (NASDAQ:GMCR) and raised his price target by 10% to $134 (from $122) to reflect the incremental market shares protected with the new Kraft partnership.

Van Winkle noted: “With multiple license and new private label deals in place, GMCR has locked up the economics on K-cup sales, allowing for earnings growth to accelerate to match growth of single-serve coffee system-wide sales. We reiterate our BUY rating and are raising our price target by 10% to reflect the incremental market shares protected with the new Kraft partnership.”

The analyst continued, “The Keurig system is now complete from the standpoint of enjoying economics on the overwhelming majority of k-cup sales. With all of the major US brands now under license, manufacture or partnership deals of some form or another along with several major private label deals such as Costco, BJs & Target Keurig can focus on growing the system without concern of what percentage of incremental economics its will participate in. Further, an often overlooked benefit of GMCR’s partnerships with brands is that while green coffee costs have been the concern of late, the rising participation in economics of brands where GMCR doesn’t shoulder the green coffee costs simply mitigates another risk to margins. The Kraft deal, given it was the last remaining brand of any importance for a partnership, is thus worth more to shareholders than simply the incremental economics to GMCR from Kraft’s market shares. We are making no changes to our estimates as we need to determine when the economics kick in and Kraft’s share at the time, but there is clearly a positive bias to our forecasts.” 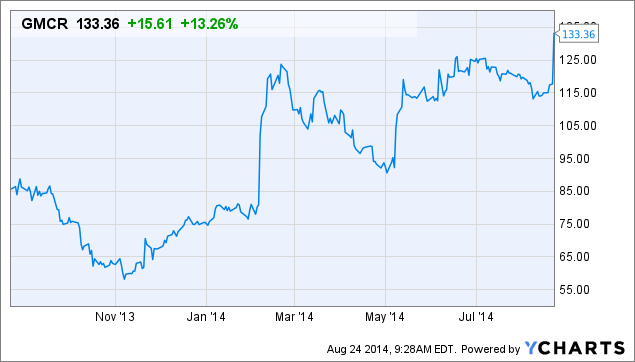