Kite Pharma Inc (NASDAQ:KITE) has been reiterated as a Buy at Canaccord Genuity by research analyst John Newman. The analyst reiterated a Buy rating on the stock with a price target of $90, after the company released its fourth-quarter results and provided a corporate update.

Newman noted, “The recent acquisition of Netherlands-based TCF adds to KITE’s continued expansion of manufacturing facilities (with recent lease agreements in California), which we believe will give the company’s CART/TCR technology platform a positive European presence.”

Furthermore, “KITE is advancing a broad pipeline of TCR-based product candidates, particularly HPV-16 E6 antigens against cervical and head and neck cancers, MAGE, and NY-ESO-1 against various tumors. We find NY-ESO-1 an interesting target, since data by Rosenberg and colleagues already reported 66% objective response rates with this TCR in synovial carcinoma and 45% in melanoma.” 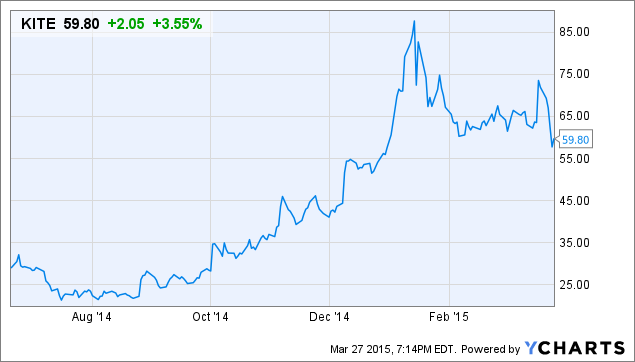