Davis wrote, “Following its first Phase 3 trial in chronic idiopathic constipation that was successfully announced June 17, Synergy has now announced a successful second Phase 3 study that is almost identical in design. Both doses, 3.0mg and 6.0mg, met the primary endpoint with flying colors by demonstrating statistical significance in the percentage of “durable responder” patients — 20.1% of 3.0mg patients and 20.0% of 6.0mg-patients, compared to only 12.8% in placebo (p=0.004 for both doses).”

The analyst continued, “From a commercial standpoint, the most important data was the extremely low diarrhea side effect rate; at 3.2% and 4.5% for 3.0mg and 6.0mg – vs 1.3% placebo. These were less than half of the 9.7% observed in Ph2, and a fraction of Linzess’ 16% seen in its CIC Ph3. Therefore, with efficacy just as good and the low diarrhea rate as a clear differentiator in the marketplace, we feel very good in our target price”

Davis reiterated a Buy rating on SGYP with a price target of $19, which implies an upside of 111% from current levels. 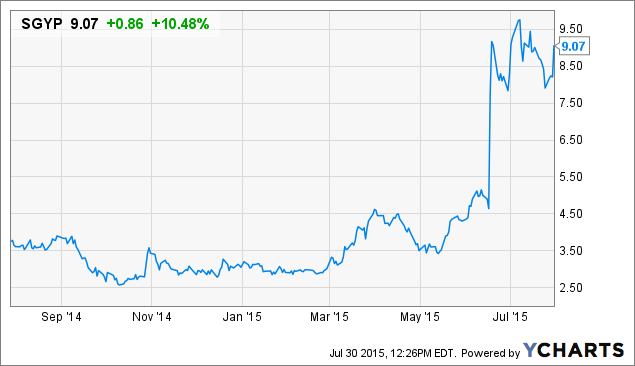