In a research report published today, Canaccord analyst Gabriel Dechaine reaffirmed a Buy rating on Bank of Nova Scotia (NYSE: BNS) with a $77 price target, following the release of the company’s quarterly results.

Dechaine wrote, “While 3% YoY earnings growth is hardly exciting, we believe the segment’s performance was positive due to (1) solid, albeit unspectacular, FX-adjusted loan growth of 8% YoY; (2) another quarter of strong expense performance; and (3) better-than-expected NIM. We note that margins were up 5bps QoQ, better than our forecast that reflected conservatism vis-a-vis June’s rate cut in Mexico. While the segment should benefit from easier comps over the next two quarters (especially on NIM), it is worth highlighting that underlying performance will be challenged by the lack of credit mark amortization on Colpatria loans, which will cause reported 2015 PCLs to increase by up to $120M, after tax (or $60M to BNS considering its 51% economic interest).” 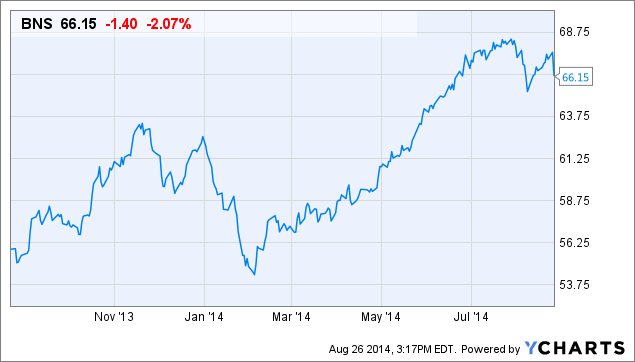