Canaccord Genuity analyst Jed Dorsheimer came out today with a research note on SolarCity Corp (NASDAQ:SCTY), following the company’s fourth quarter results. The analyst slightly raised the price target to $67 (from $64) and maintained a Buy rating on the stock, even though the company reported a net loss attributable to shareholders of $3.6 million, compared to a profit of $26.7 million in the year-earlier quarter.

Dorsheimer noted, “We maintain our BUY rating on SolarCity, reiterating the long-term opportunity and belief that the company will outpace market growth and create significant value from its solar deployments over time.” He continued, “SolarCity has continued its growth and maintains its goal of 920MW to 1GW in 2015. While Q1 2015 revenue guidance was light of our expectations, the company is particularly excited about its booking numbers in Q1. Notably, bookings in the last 30 days have been larger than has ever been done in the past and Q1 should be close to a record booking number. We believe this will translate into a ramp of deployments in Q2 and Q3 as seasonal factors subside. In the meantime, soft deployments are largely a factor of the commercial segment lumpiness and winter effects.”

According to TipRanks.com, which measures analysts’ and bloggers’ success rate based on how their calls perform, analyst Jed Dorsheimer has a total average return of -1.0% and a 38.6% success rate. Dorsheimer is ranked #2834 out of 3479 analysts. 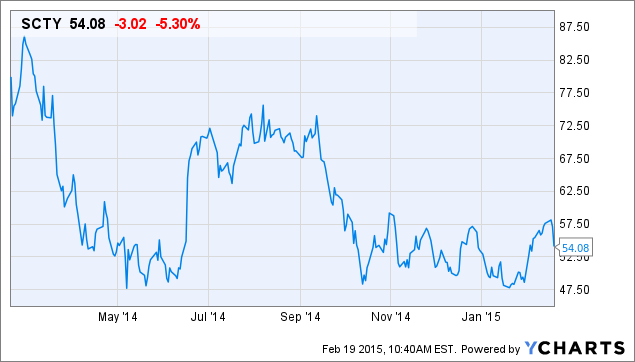