Canaccord Genuity analyst Matthew Ramsay came out with a research note on Ambarella Inc. (NASDAQ:AMBA), maintaining a Buy rating, while raising the price target to $86 (from $81), which implies an upside of 14% from current levels. The increased price target comes after the company’s key customer GoPro Inc (NASDAQ:GPRO) reported a very strong GoPro JuneQ guidance.

Moreover, “GoPro reported strong Q1/15 results with over 50% of sales Hero4 cameras featuring Ambarella A9 processors. In addition, GoPro provided JuneQ guidance for sales of $380-400M (+59% Y/Y) or well above Street estimates of $334M and above our 48% Y/Y GoPro sales growth assumed in our Ambarella estimates, especially important considering we anticipate higher blended ASPs Y/Y to GoPro for Ambarella given the strong A9 mix. We believe GoPro’s strong JuneQ guidance could lead to upside to Ambarella’s AprilQ results when paired with ramping sales to new customer Xiaomi.” 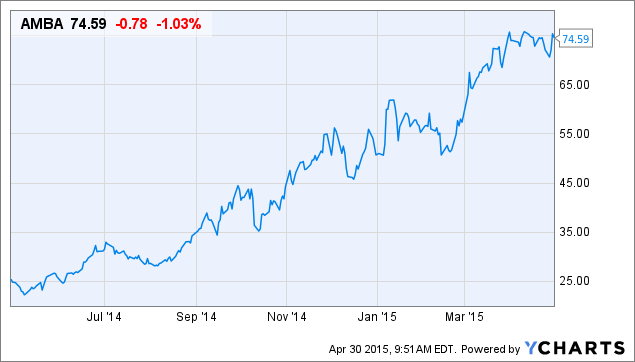