In a research report issued today, Canaccord Genuity analyst Corey Davis reiterated a Hold rating on Teva Pharmaceutical Industries Ltd (ADR) (NYSE:TEVA) with a $60 price target, following the company’s fourth-quarter results that were generally a non-event and in line with expectations.

Davis noted, “Revenue of $5.2B beat our and consensus numbers slightly, mostly attributable to better-than-expected performance in the specialty business. Despite Fx headwinds and flat year-over-year revenue growth, non-GAAP EPS was $1.31, only pennies off our estimate. Further, Teva re-affirmed 2015 EPS guidance of $5.00-5.30; but not inclusive of new initiatives or BD targets.”

The analyst added, “Pfizer announced its acquisition of Hospira for $17B. This was a surprise since Teva has repetitively expressed its interest in expanding its injectable business, and many had speculated that Hospira was a likely target. However on the CC, management indicated that the strategy is to focus on niche injectables, not the mass market that Hospira resides in. Although it’s unclear the type of asset Teva will buy, it’s clear the company is focused much more on a positive ROI instead of immediate EPS accretion.” 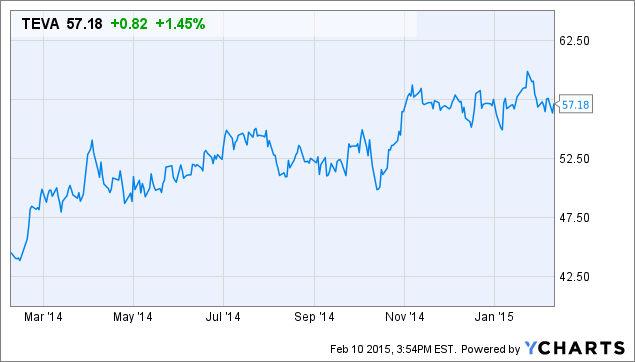