In a research report sent to investors, Canaccord Genuity analyst Matt Ramsay maintained a Hold rating on Advanced Micro Devices (NASDAQ:AMD) and reduced his price target to $2.50 (from $2.75), which represents a slight upside potential from current levels.

Ramsay noted, “We believe AMD’s diversification strategy continues to show gradual progress and could position the company for more defensible longterm growth. However, AMD has not been able to stem the decline of its Computing & Graphics business, even amidst a stronger PC backdrop, given AMD’s over-exposure to consumer markets and important technology advantages for Intel at 14nm. Further, while a recent restructuring to lower operating expenses by roughly 10% should keep the company modestly profitable until new semi-custom wins deliver revenue in 2016, we worry recent management departures and continued restructuring could prove disruptive given the need to innovate on a broadening roadmap.”

The analyst concluded, “Despite believing in the long-term strategy under AMD’s new CEO Lisa Su, we continue to wait for tangible signs of core business stability before recommending shares. That said; stabilizing the PC business while still hitting a 2015 break-even target would certainly prove new management’s mettle.” 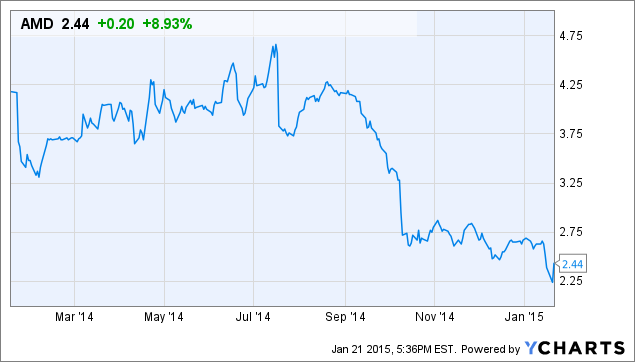