Canaccord Genuity analyst John Newman was out pounding the table on Agios Pharmaceuticals (NASDAQ:AGIO) Tuesday, reiterating a Buy rating and a price target of $163, following the company’s fourth-quarter results and update on its pipeline.

Newman wrote, “We expect data in solid tumors by 2H15 at a major medical conference, a key catalyst for the stock. We expect positive data due to the fact that IDH1 mutations demonstrate a homogenous expression of R132 allele in solid tumors, which have been shown to be a positive prognostic factor (~1 year in glioblastoma) for survival. Importantly, investors may have expected AG-120 solid tumor data earlier, but solid tumor patients are evaluated at more distinct time points vs. hematological malignancies, where the time point for evaluation of hematologic malignancies is more flexible. Interestingly, AGIO noted that preclinical data in hematological and solid tumors for AG-120 was very similar, but that read through to solid tumor data at this point was premature.”

The analyst continued, “Agios expects updated data for AG-120 in heme malignancies by mid-2015, where we believe response rates and especially duration of response will be key. A robust duration of response would signal higher potential to meaningfully extend survival in our view, and would serve as a positive catalyst for the stock. To date, clinical data demonstrate an ORR of 50% in 14 IDH1m leukemia patients, with an impressive 29% CR, 14% CRi/CRp, which we find very positive for an oral drug since most patients in this disease state are heavily pretreated and elderly.” 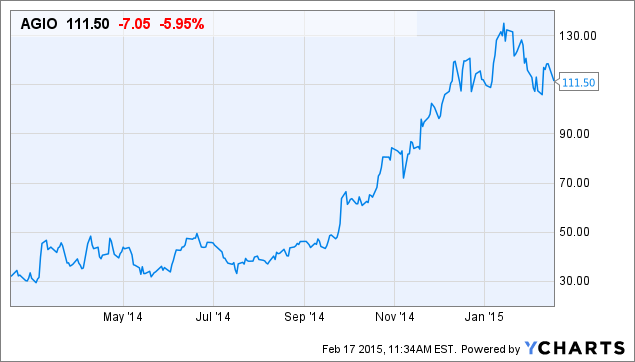