Canaccord Genuity analyst Mark Massaro weighed in today with a research note on Quest Diagnostics Inc (NYSE:DGX), following speculation that the company may be exploring a sale of its business, sending shares up as much as 20 percent on Friday.

Massaro wrote, “Given what we believe to be an opportunity to take DGX into a positive organic volume trajectory and improve the company’s operations, we wouldn’t be surprised to see bids from one or more private equity players. Today’s speculation in the markets reminds us of similar reports its large competitor LH was involved in similar discussions, which the market digested in August 2012. We know how the LH story unfolded. Rather than sell the business, LH went out and surprised the market in buying Covance and has since transformed its business model.”

Bottom line: “Today’s market reaction is a clear indication to us, consistent with our upgrade note to BUY on March 3, that the stock has been presently undervalued in the markets for some time and is significantly under-appreciated (we are 1 of 3 Buy ratings out of 23 analysts).”

The analyst maintained a Buy rating on Quest Diagnostics Inc shares with a price target of $85, which implies an upside of 15.5% from current levels. 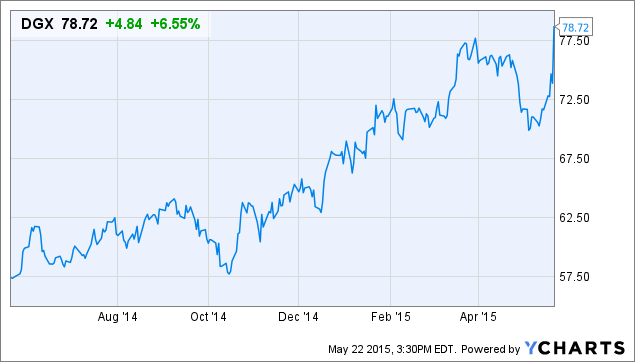