In a research report released today, Canaccord Genuity analyst Neil Maruoka reiterated a Hold rating on shares of AEterna Zentaris Inc. (USA) (NASDAQ:AEZS) with a $0.70 price target, after the company announced an agreement with EMD Serono that will allow the company to promote the recombinant human growth hormone Saizen in various regions of the US.

Maruoka noted, “Under this arrangement, the company will receive payments for new patients who begin taking Saizen in the territories promoted by AEterna Zentaris. We believe this deal allows the company to expand further into endocrinology, complementing its existing partnership for EstroGel. The arrangement will also allow AEterna Zentaris to leverage its existing sales force by adding Saizen to the product mix.”

Furthermore, “Based on our review of prescription and sales data, we estimate that the US market for Saizen was approximately $166 million in 2014 (an 11.5% increase over the previous year) and has been solidly trending up into 2015. Further, we estimate that Saizen has a current annual run rate in the US of approximately $180 million. However, at this time, insufficient details of the partnership arrangement are available for us to make adjustments to our financial forecasts.”

According to TipRanks.com, which measures analysts’ and bloggers’ success rate based on how their calls perform, analyst Neil Maruoka has a total average return of 14.1% and a 73.9% success rate. Maruoka is ranked #770 out of 3596 analysts. 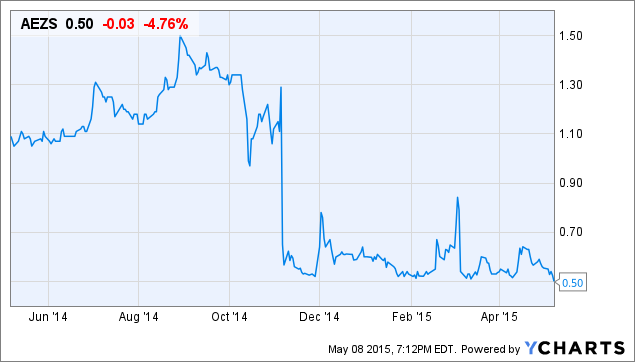