In a research report published this morning, Canaccord Genuity analyst Adam Walsh maintained a Hold rating on Sarepta Therapeutics Inc (NASDAQ:SRPT) with a $16 price target, after the company reported fourth-quarter financial results and update on its pipeline. Cash burn was $29 million for the quarter and the analyst expects the company to have sufficient capital to sustain operations to mid-16.

Walsh noted, “Sarepta’s lead drug candidate, eteplirsen for DMD, appears highly safe and effective based on trial results to date. We think FDA’s primary concern ultimately boils down to the small size of the eteplirsen dataset. Erratic FDA signals, incomplete visibility on FDA position, and feedback from KOLs keep us on the sidelines. Sarepta has indicated that a planned mid-15 NDA filing could potentially yield approval in 1H16. Our base-case scenario assumes eteplirsen US approval and launch in 2017 (vs. best case 1H16).”

Bottom line, “Near-term regulatory concerns aside, we believe eteplirsen appears to be a very effective drug for DMD patients and will likely win FDA approval at the end of the day. In our view, it’s not a question of if, but a question of when. Our price target of $16 is 35x our fully taxed, fully diluted FY2022 EPS estimate discounted annually back to YE15 at 40%.”

According to TipRanks.com, which measures analysts’ and bloggers’ success rate based on how their calls perform, analyst Adam Walsh has a total average return of 8.8% and a 100.0% success rate. Walsh is ranked #2225 out of 3483 analysts. 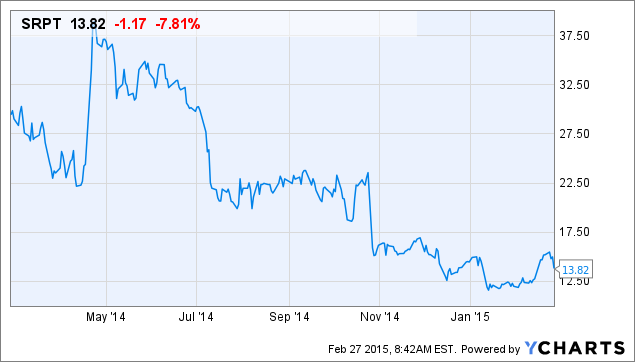