Canaccord Maintains Hold On Acorda Due To Generic Challenge By Actavis

In a research note released yesterday, Canaccord Genuity analyst John Newman maintained a Hold rating on Acorda Therapeutics (ACOR) and reduced his price target to $30 (from $37).

Newman explains, “Acorda will initiate its Phase 3 stroke study with the current 2x daily Ampyra formulation, which could shorten the stroke revenue stream due to generic challenge by Actavis (ACT). Acorda will likely include a dose different than its current 10mg 2x daily Ampyra dose, which would require a separate challenge by generics, increasing barrier to entry. Acorda plans to test a reformulated 1x daily dalfampridine (if successful) in a second Phase 3 stroke study.

However, “We are lowering our price target on concerns about the ultimate longevity of Ampyra/dalfampridine revenues in MS walking and stroke. Our target declines to $30 based on higher risk of generic entry in stroke by 2021 versus our prior estimate of 2024”.

According to TipRanks.com, which measures analysts and bloggers success rate based on how their calls perform, analyst John Newman currently has a one-year average return of -3.1% and a 53% success rate. Newman is ranked #2788 out of 3211 analysts. 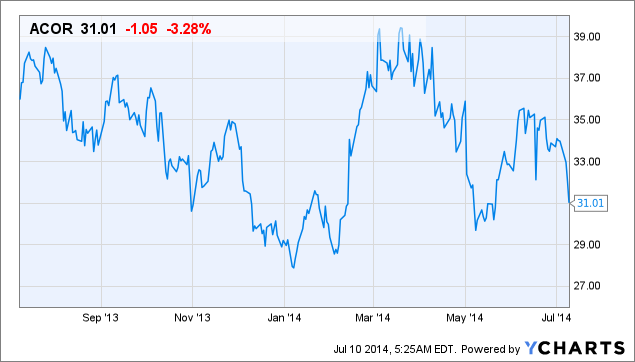