In a report issued today to investors, analyst Noah Parquette of Canaccord Genuity maintained a Buy rating on Navios Maritime Holdings (NYSE:NM) shares, with a $14 price target. The report follows the company’s second-quarter earnings, posting operating EPS of ($0.09) versus Parquette’s estimate of ($0.18) and the consensus estimate of ($0.13).

Parquette noted, “We believe that as the head of the Navios Group of companies, Navios Maritime Holdings will continue to benefit from economies of scale and maintain its status as an efficient low-cost dry bulk operator.” The analyst added, “We believe Navios Logistics has significant value and feel NM can benefit from the planned spin-off of the business unit. Navios Logistics recently completed a six year charter for 36 of their barges and in August finished dredging the Nueva Palmira port facility. This uniquely positioned play on the development of the Hidrovia river system in South America appears poised for significant growth over the next few years. Based on our forecasts, we believe the market is undervaluing this asset and a spin-off could bolster Navios Maritime Holdings’ shares.” 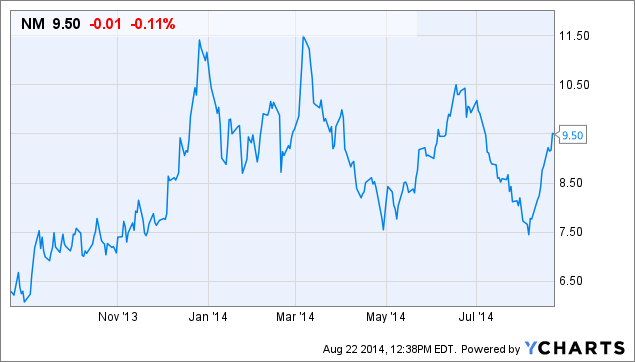