Imax Corporation (IMAX) announced this morning the expansion of its JV arrangement with AMC by a further 11 theatres. The contract term is 13 years. This takes the total theatre count (installed and contracted) with AMC to 159. The new systems are to be installed in New York, Chicago, Newark and Phoenix and scheduled for 2015.

In reaction, Canaccord Genuity analyst Aravinda Galappatthige today issued a note in which he reiterated a Buy rating on the stock with a price target of $34.50.

Galappatthige commented: “IMAX is continuing to show good momentum in its theatre signings, particularly in Q2. Recall: they signed a 19-theatre deal in China last month with the Shanghai Film Corporation and more recently a 3-theatre deal with Cinepolis (for US installation). Typically we look for 100- 120 signings per year on a go-forward basis. Thus, Q2 is clearly outperforming, with 33 already announced.” The analyst added, “While IMAX’s annual installations have been in the 110-120 range and are expected to be so in 2014 as well. If we continue to see a meaningful level of signings with shorter install periods, it is possible that 2015 would see an uptick from that level. Based on the size of the backlog (408 systems), we suspect that 2015 already has at least 100 systems scheduled for installation, possibly more.” 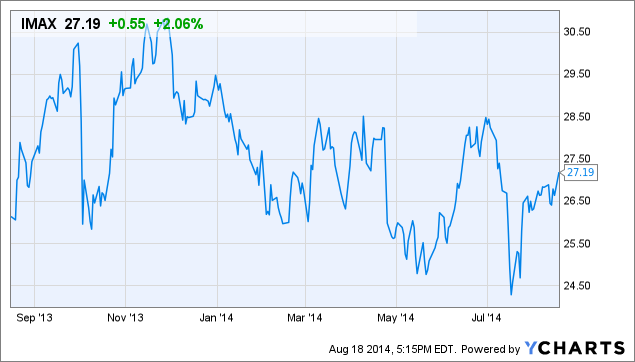