In a research report released Friday, Canaccord Genuity analyst Tony Lesiak reiterated a Buy rating on Goldcorp Inc. (USA) (NYSE:GG) (TSE:G), but reduced the price target to C$33.50 (from C$36.00), as the company announced fourth-quarter financial results which were well below expectations. The new price target represents a potential upside of 25% from where the stock is currently trading.

Lesiak wrote, “We chalk the miss up to year-end translation and transitory issues and are not overly concerned. Operationally the momentum appears to be solid with the Penasquito water field still on track for midyear, Cerro Negro ramping well, the teething issues at Eleonore solved, Cochenour still on track for first ore in Q415 and commercial production mid-2016. What was somewhat disappointing was the YE reserve statement which saw limited benefit from the company’s aggressive exploration efforts. However, management has suggested that the program should bear fruit in 2015, especially at Red Lake.”

The analyst added, “We have revised our target largely to reflect the reserve losses at Los Filos and Penasquito (both due to metallurgy and revised mine plans), a shorter mine life at Marlin, and a higher LOM sustaining capital assumptions.” 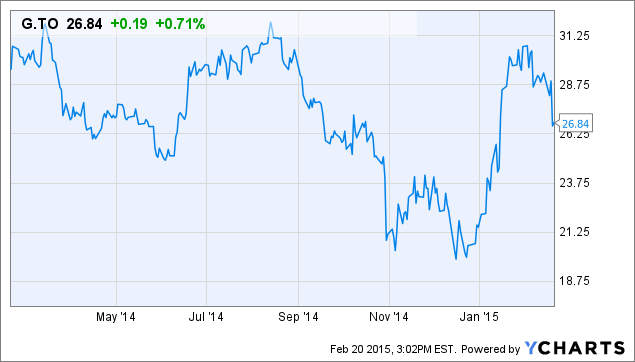 Goldcorp Inc. (USA) (GG) Is Back and Spending: Could West Red Lake Gold Mines Be Next?