In a research report issued this morning, Canaccord Genuity analyst Mark Massaro maintained a Buy rating on EXACT Sciences Corporation (NASDAQ:EXAS) with a $27 price target, which represents a potential upside of 28% from where the stock is currently trading. The report follows today’s news that the company signed a 3-year Medicare Advantage (MA) plan with Aetna Inc (NYSE:AET).

Massaro noted, “At this juncture, we view the news to be an incremental positive with the chance of becoming much more significant in the event the company can leverage this deal with Aetna to also cover their commercial covered lives. At this time we think it’s premature to assume that a MA deal with Aetna will lead to a commercial lives deal in the near future; however, we think having a multi-year deal in place is certainly helpful.”

Furthermore, “We spoke to management this morning, who acknowledge that while the deal may not help volumes on the Medicare side (Exact was already providing services to Aetna Medicare members), the deal could be helpful on the accounting side, which we believe to mean more timely payment from Medicare Advantage lives. We continue to believe that the next major catalyst is the announcement of a large commercial payor. While today’s news is not that, we think there is some chance of increased odds to sign a commercial payor with Aetna prior to the USPSTF decision, which we expect by late 2015/early 2016.” 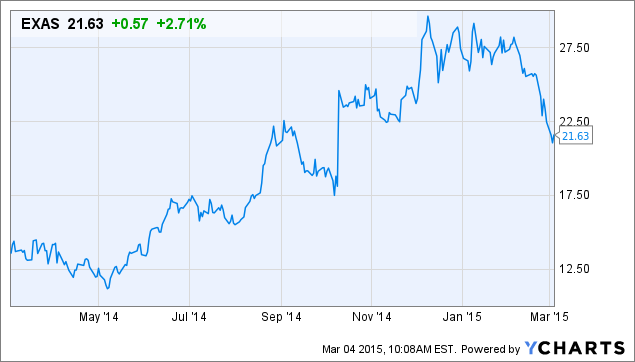