Golden Star Resources Ltd. (USA) (NYSEMKT:GSS) price target has been raised by research analyst Rahul Paul at Canaccord Genuity. The new price target now stands at $0.70 (from $0.50), representing an upside of nearly 8% over the closing stock price. The analyst also maintained a Buy rating on the stock, following stronger than expected first-quarter results and announcement of a $150 million financing with Royal Gold.

Paul noted, “Although we would generally classify gold stream financings as punitive, we view the RGL transaction as positive for several reasons: 1) flexibility to deliver production from either asset (rather than a single asset), 2) spot gold-linked delivery price (rather than a fixed price), 3) no fixed deliveries in the initial years, 4) production delivered under the stream eventually declines to 3% longer term, and 5) financing should facilitate development of Prestea Underground, which could contribute an incremental 82 Koz average annual lowcost production.”

“We now see GSC as well positioned to execute on its stated strategy to transform the company into a low-cost producer by 2018. With lower-cost production from Wassa Underground expected to commence in early 2016 and from Prestea Underground expected to commence in early 2017, we forecast 2018 production of 312,000 oz at AISC of $850/oz by 2018 (averaging $810/oz from 2018-2025) with forecast net free cash flow of $50 million (75% of current market cap) in 2018. We estimate a net cash position of $81 million by Q4/20, which is higher than the company’s current market capitalization.”, the analyst added.

According to TipRanks.com, which measures analysts’ and bloggers’ success rate based on how their calls perform, analyst Rahul Paul has a total average return of -4.7% and a 62.1% success rate. Paul has a -23.4% average return when recommending GSS, and is ranked #3202 out of 3602 analysts. 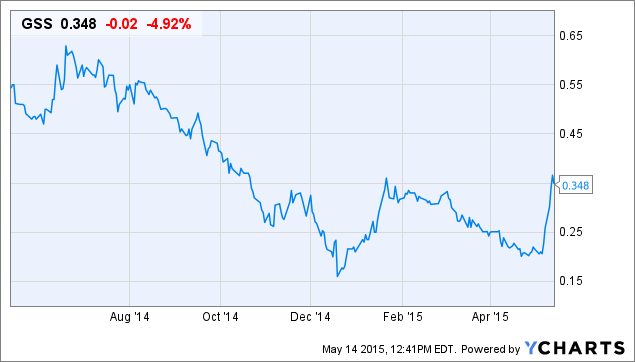