In a research report issued on Wednesday, Canaccord Genuity analyst Michael Graham came out with an update on Facebook Inc (NASDAQ:FB) after the stock’s performance had cooled over the past six months. This was mostly due to negative Q1 earnings, which were characterized by strong underlying metrics albeit with a weaker Q2 outlook due to FX headwinds. The analyst reiterated a Buy rating on with a price target of $90.00, which represents a potential upside of 10.7% from where the stock is currently trading.

Graham wrote, “We believe Facebook’s fundamental outlook remains positive, underpinned by multiple revenue drivers that span both the near and long term. While the company’s ~$230B of market value makes the idea of the stock doubling anytime soon somewhat challenging, we find the valuation reasonable, especially when set against the robust growth outlook.”

The analyst also noted, “Facebook’s EBITDA margin is already the highest in the sector. In 2014, Facebook achieved a 67% EBITDA margin. We expect this to fall to 61% as the company invests heavily in its adjacent platforms and underlying ad tech.”

“However even at this level it is still 1.5x Google’s EBITDA margin and 2.5x Twitter’s. While we like Facebook’s revenue outlook, we note that EPS expansion may not outpace revenue growth, with what seems to be limited operating leverage potential.”, the analyst added.

Out of the 46 analysts polled by TipRanks, 42 rate Facebook stock a Buy, 3 rate the stock a Hold and 1 recommends Sell. With a return potential of 5.4%, the stock’s consensus target price stands at $85.69. 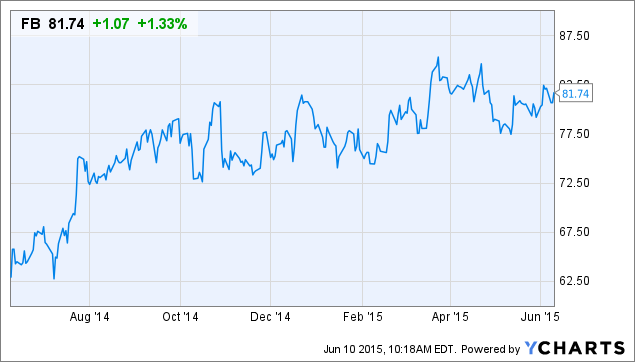