Canaccord Genuity analyst Karl Chalabala weighed in with a few insights on Rex Energy Corporation (NASDAQ:REXX), following the news that the company has entered into a joint venture agreement with an affiliate of ArcLight Capital Partners to jointly develop 32 specifically designated wells in the company's Butler Operated Area. The analyst rates the stock a Hold with a $7 price target, which represents a potential upside of 88.2% from where the stock is currently trading.

Chalabala noted, "The transaction gives Rex breathing room in regard to its balance sheet, as the company receives $16.6 million in cash, $67 million in total, with ArcLight funding 35% of well costs in specifically designated areas for 32 wells: 16 in the legacy Butler acreage and 16 in the Moraine East acreage. Upon achieving certain threshold triggers of IRR and ROI on specific well groups, ArcLight's working interest will revert to 17.5%. In addition, ArcLight will have the option to participate as a 20% working interest partner in 17 additional Moraine East wells in 2016. The deal eases Rexx’s 2015 cap ex requirements to $135-$145 million, a 30% decrease on the guide."

According to TipRanks.com, which measures analysts' and bloggers' success rate based on how their calls perform, analyst Karl Chalabala has a total average return of -3.0% and a 58.8% success rate. Chalabala is ranked #2926 out of 3562 analysts. 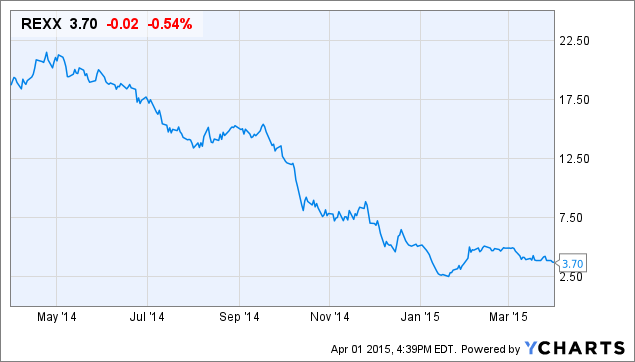