Canaccord Genuity analyst Corey Davis came out with a research report on Synergy Pharmaceuticals Inc (NASDAQ:SGYP) after the company announced positive top-line results from the first of its two Phase 3 trials for plecanatide, a drug to treat chronic idiopathic constipation (CIC) and irritable bowel syndrome with constipation (IBS-C). Davis maintained a Buy rating on Synergy with a price target of $19.00. Shares of SGYP closed yesterday at $7.78, up $3.14, or 67.67%.

Davis wrote, “Given IBS-C is a more complicated condition than CIC, because of the inclusion of pain scores in a composite primary endpoint, there is still risk for that Phase 3 program later this year. However, the numerical responder rates tend to be higher because of the different criteria. And given the similar mechanism to Linzess, we think the risk is low. We would emphasize that CIC alone is an FDAapprovable indication.”

Further, “We have consistently stated for years that we think Linzess can be a $2B drug. And now with this impressive data (albeit still requiring 3 more large Phase 3’s to mature) in hand, we see no reason why plecanatide couldn’t have equal magnitude — in the hands of the RIGHT marketing partner.” 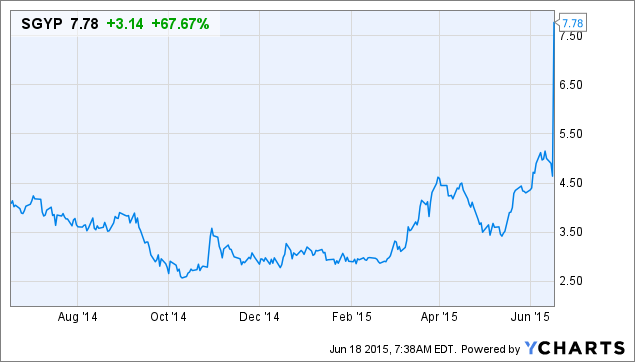