In a research report released today, Canaccord Genuity analyst Rahul Paul maintained a Buy rating on Golden Star Resources (NYSE:GSS) with a $0.90 price target, following the release of a PEA for the Wassa mine.

Paul wrote, “Overall, while life-of-mine production was lower than our estimate; this was more than offset by lower associated capital and an earlier underground start-up (2016 vs. our previous assumption of 2020) highlighting a project that could be much easier to finance through available sources of cash in current market conditions (vs. our previous modelled profile). We see potential upside to the PEA forecasts from 1) exploration potential at depth which could continue to expand the underground resource over time, 2) potential incorporation of some open-pit mineralization outside the planned $1,100 pit shell to fill the mill in 2020 and beyond. We continue to see value in the stock which trades at 0.33x P/NAV, a 50% discount to the producer P/NAV average. We anticipate that execution on the current plan will be key to achieving an improved multiple.”

Paul added, “Longer term we believe exploration upside remains key to maintaining production levels and unlocking further value from Wassa. While the current underground resource remains open down plunge, deeper drilling has been halted since drilling from surface is now quite expensive. We see the potential for further resource growth if exploration efforts were to recommence once underground development is further advanced.”

According to TipRanks.com, which measures analysts’ and bloggers’ success rate based on how their calls perform, analyst Rahul Paul has a total average return of -16.4% and a 42.9% success rate. Paul has a -44% average return when recommending GSS, and is ranked #3164 out of 3298 analysts. 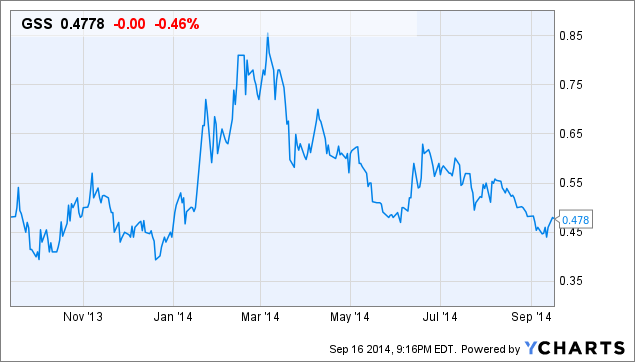