Lyon wrote, “While current fashion footwear trends remain in a holding pattern, we believe the 6-12 month outlook is becoming increasingly positive for SHOO, despite sentiment that suggests fashion trends will remain lackluster. We believe the work management has done to engineer incremental earnings growth drivers (e.g., brand acquisitions, license takeovers, and stock buybacks) will propel earnings growth next year to the high teens (we are estimating 19%). Moreover, we also believe fashion footwear is approaching the end of its trend malaise. Historically, stale fashion usually transitions to a new trend one year later – this was the case in 2007 and we believe it is the case in 2014, particularly as the athletic look is gaining broader acceptance. SHOO’s short lead times and fast turn capabilities should allow it to adapt quickly resulting in incremental share gains.”

According to TipRanks.com, which measures analysts’ and bloggers’ success rate based on how their calls perform, analyst Camilo Lyon has a total average return of 9.1% and a 57.5% success rate. Lyon has a 11.7% average return when recommending SHOO, and is ranked #252 out of 3336 analysts. 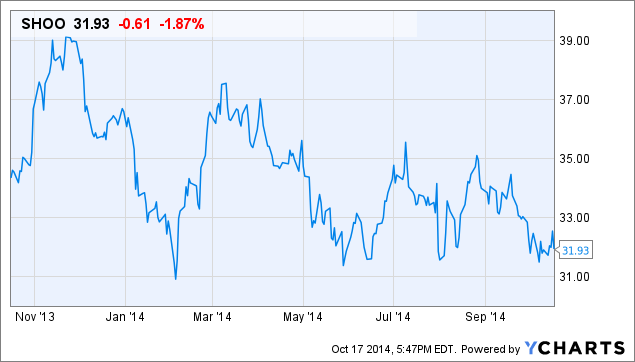