Canaccord Genuity analyst John Newman came out today with a research report on Agios Pharmaceuticals Inc (NASDAQ:AGIO), reducing the price target to $93 (from $103), and reiterating a Hold rating on the stock. The decreased price target comes in response to expectations of negative data for AG-120 in solid tumors during the second half of 2015.

Newman noted, “We continue to expect negative data for AG-120 in solid tumors during 2H15, at either ESMO in Vienna September 25-29, or at AACR in Philadelphia October 23-26, although Agios could choose to present at another meeting. We suspect negative data for AG-120 in solid tumors for three reasons: (1) The AG-120 trial in solid tumors including glioma has been running since March of 2014 with no data yet disclosed; (2) Agios announced the initiation of clinical work for AG-881, a molecule targeting IDH1 with greater penetration across the blood brain barrier vs. AG-120; and (3) the IDH1 mutation has been shown to be important in hematological malignancies, but evidence in solid tumors is less robust.”

Out of the 8 analysts polled by TipRanks, 6 rate Agios stock a Hold, while 2 rate the stock a Buy. With a downside potential of 6.0%, the stock’s consensus target price stands at $94.83. 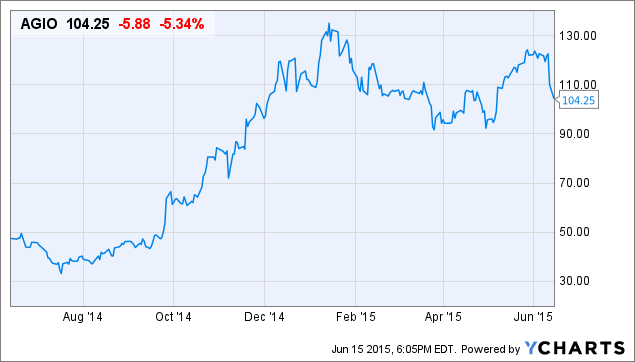