In a research report issued today, Canaccord Genuity analyst Gabriel Dechaine maintained a Buy rating on Bank of Nova Scotia (NYSE:BNS) (TSE:BNS), and raised the price target to C$71.00 (from C$67.00), after the company released its fiscal first-quarter results, posting profit that missed analysts’ estimates as domestic and international banking earnings declined. However, the bank raised its quarterly dividend 3% to 68 cents a share.

Dechaine stated, “One of the big surprises from the quarter was the 50bps QoQ decline in BNS’ CET 1 ratio, to 10.3%. This move erased much of BNS’ capital advantage versus peers. More importantly, it could raise doubts about BNS’ ability to deploy capital via M&A, which is necessary to offset some of the earnings dilution that resulted from the CIX stake sale in 2014. We note, though, that management did not signal any restrictions on their M&A aspirations (other than standard target selection criteria). In our view, the 3% dividend increase (expected) and the 33% increase to BNS’ share buyback program are clear signals that the bank is not rationing capital.”

Furthermore, “We note that BNS also has a remaining stake in CIX (current market value of nearly $800 million) that could be sold if the bank finds attractive investment opportunities. As it relates to M&A, we note that the Cencosud and Citibank Peru acquisitions are closing shortly. Although they are small transactions (i.e. combined $25 million of earnings/annum), we estimate that both will generate returns in excess of what BNS was earning on its CIX investment (i.e.~5-6%).”

The analyst explained his new price target, “Our C$71.00 target has been increased from C$67.00 and is derived using an 12.1x forward P/E multiple. The increase in our target primarily reflects rolling forward of our valuation horizon by two quarters.” 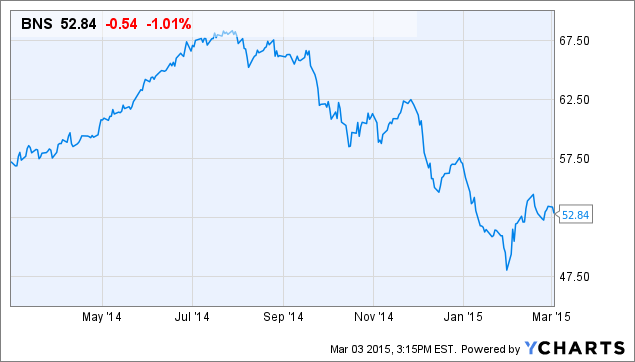