Napoli noted, “We believe shares of CAI International offer an attractive risk/reward opportunity based on the overall improving strength of the container leasing market and key company- specific metrics combined with shares trading at 0.94 times our 2014 year-end book value estimate of $20.60 and 6.8 times our 2015 EPS estimate. The 2015 consensus EPS estimate, which was way too aggressive early, in our view, has come down. At $3.03, the consensus estimate is still above our $2.85 estimate, though we believe we could be conservative based on current utilization and industry fundamental trends as well as several other factors. Lease rates remain a headwind, but concerns of a lease rate cliff are likely overdone, in our view, as less than 10% of the high lease rate 2010 and 2011 vintages expire over the next two years.”

The analyst added, “We believe the valuation gap between CAI’s shares and its two peers, which trade at about 1.9 times 2014 year-end consensus book value and 11.3 times 2015 consensus EPS, is unreasonably wide and should narrow, especially considering relatively similar underlying business trends and returns. Thus, we reiterate our Outperform rating and believe the stock has an attractive risk/reward, barring a sharp reversal in the global economy.” 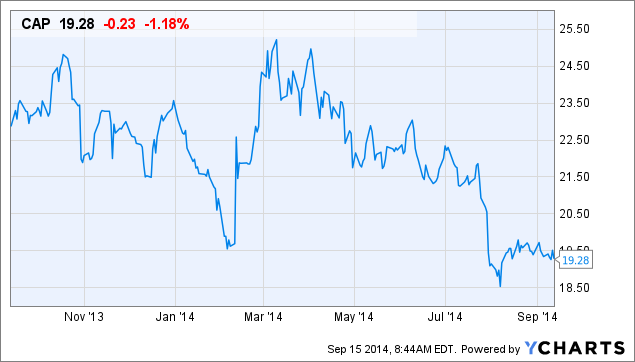