BTIG analyst Mark Palmer maintained a Buy rating on Genworth Financial Inc (NYSE:GNW) with a $15 price target, which represents a potential upside of 81% from where the stock is currently trading. Palmer’s report follows the company’s fourth-quarter earnings results, posting net operating loss of $416 million, or 84 cents a share, compared with net operating income of $193 million, or 38 cents, a year earlier.

Palmer wrote, “While Genworth Financial’s 4Q14 earnings report was predictably messy and the company reported a larger-than-expected loss as a result of the impact of its long term care (LTC) active life margin review, it also included a couple of points that should provide some measure of comfort to investors in its shares: (1) As management had said would be the case during GNW’s 3Q14 conference call, the company’s updated assumptions related to in force premium rate increases offset the reduction in the active life margin that resulted from reserve strengthening – it took an after-tax GAAP charge of $478mm related to the review in 4Q14 – and as a consequence the margin for the more than 90% of the active life book housed outside of New York remained positive. As a consequence, GNW should not need to raise capital as some had feared. (2) GNW did report that its New York subsidiary had a preliminary incremental negative margin of $195mm and that it increased statutory reserves at the unit by $39mm in 4Q14.” 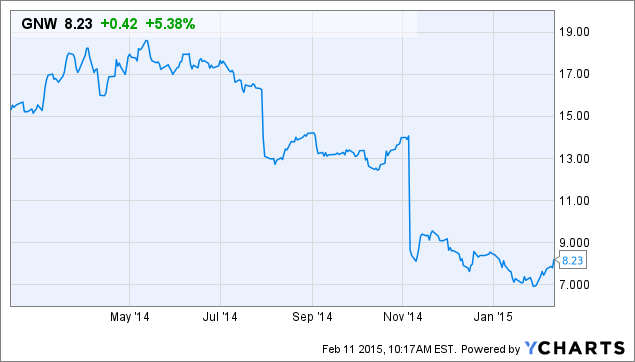