BTIG analyst Mark Palmer weighed in with his views on MBIA Inc. (NYSE:MBI), after the company reported first-quarter earnings per share of $0.37, beating the consensus estimate of $0.17 and Palmer’s estimate of $0.22. The analyst maintained a Buy rating on the stock, while raising the price target to $13 (from $12), which implies an upside of 42% from current levels.

Palmer stated, “While concerns about MBIA’s (MBI) exposure to Puerto Rico’s debt have weighed on the company’s shares, MBI has the opportunity to take advantage of the weakness by repurchasing its stock. Management did that during 1Q15, buying back 8.6mm shares and providing a boost to both earnings per share and adjusted book value (ABV) per share.”

The analyst continued, “Thanks primarily to the buybacks, MBI’s ABV per share increased sequentially during 1Q15 by $0.91 to $25.78. The company, which had $567mm of cash at its holding company as of March 31, bought back an additional 1.9mm in shares after quarter end through May 5. As of that date, MBI had $95mm of authorized capacity remaining under its share repurchase program.” 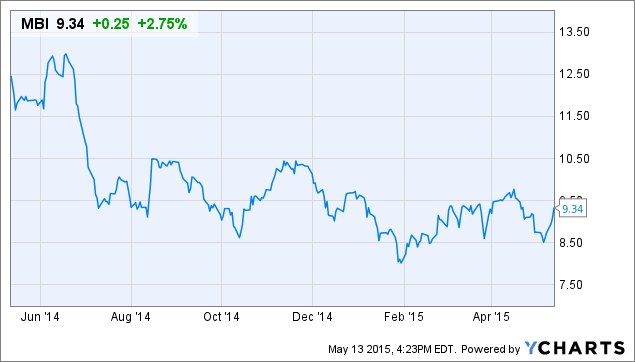