In a research report issued today, Brean Capital analyst Jonathan Aschoff reiterated a Buy rating on shares of Keryx Biopharmaceuticals (NASDAQ:KERX), while reducing the price target to $18 (from $22), after the company announced that the European Commission has approved Fexeric for the control of elevated serum phosphorus levels, or hyperphosphatemia, in adults with chronic kidney disease, including both dialysis and predialysis patients.

Aschoff noted, “Given that first pricing in the EU (Germany most likely, followed by the UK) should take about 12 months from the start of negotiations (estimated to be late 2015/early 2016), we have shifted EU revenue to the right by about a year and have modeled it now as a 30% royalty rather than straight revenue with a corresponding increase in SG&A, resulting in a target price reduction to $18, which still represents substantial upside potential”

“An often reiterated bear point against Keryx was that its version of ferric citrate was not novel enough for the company to enforce its patents and thus to ward off any generic competition. Today’s development is therefore one that undercuts that bear point. Auryxia has not yet been designated as a New Chemical Entity (NCE) in the US, and although the timing of such a designation is very difficult to estimate, the EU development is clearly a protective step in the right direction. Keryx is in active negotiations with potential EU partners and will have its EU commercialization plan laid out by YE15; we expect a partner to be signed by then rather than an announcement of going it alone,” the analyst added.

Out of the 9 analysts polled by TipRanks, 5 rate Keryx stock a Buy, while 4 rate the stock a Hold. With a return potential of 230%, the stock’s consensus target price stands at $13.33. 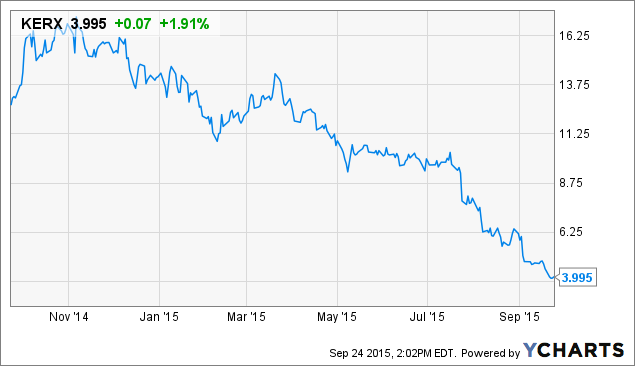