In a research report issued yesterday, Brean Capital analyst Jonathan Aschoff maintained a Buy rating on Incyte (NASDAQ:INCY) and slightly raised his price target to $76 (from $74), which represents a potential upside of 17% from where the stock is currently trading.

Aschoff observed, “US Jakafi sales of $98 million beat consensus of $90 million, and ex-US Jakafi royalties of $12 million was in line enough with consensus of $13 million. Inventory in the channel at the end of 3Q14 was 3.3 weeks, well within the normal range of 3-3.5 weeks. Most importantly, Incyte raised its full-year Jakafi US sales guidance to $350-360 million from $330-340 million, which does not account for any Jakafi sales from PV. Total revenue in 3Q14 also included milestone revenues of $25 million from Novartis for Japan approval of Jakavi for MF and of $60 million from Novartis for obtaining MF pricing in three major EU countries. Incyte reported diluted EPS of $0.33, versus consensus of $0.01, again due to unmodeled milestones. Over the quarter, Incyte has seen continued adds of new MF patients on therapy and a steady increase in persistence in existing MF patients. We anticipate significant contribution to Jakafi sales from PV in 2015 without significant increase in SG&A expenses, as we see high overlap on MF and PV prescriber base.” 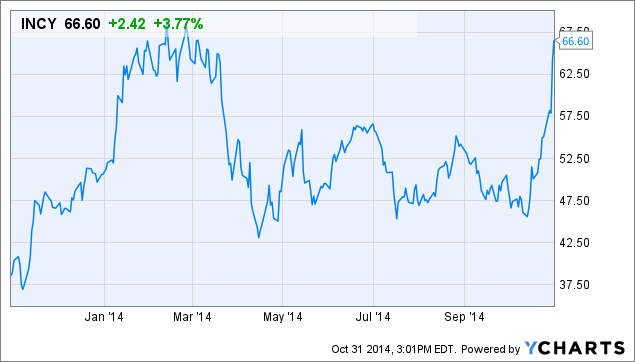