Aschoff wrote, “We note that a key data analysis difference between the final dataset and the interim dataset is that final data used an ITT population LOCF analysis, versus the more forgiving completers analysis used at interim. The completers analysis at interim was prespecified, and at final it was to include multiple populations, yet Ohr chose only the most conservative analysis. At final, a clear statistical trend was seen in the ≥3 line responder endpoint, which has already been selected for Phase 3 after Ohr’s EOP2 meeting with the FDA, despite no statistical significance on any efficacy endpoint, but we contend that a Phase 3 trial with about 150 patients per arm should be sufficient for adequate powering.”

Furthermore, “In classic CNV containing patients, Ohr’s 42% versus 28% ≥3 line responder analysis still numerically beats Ophthotech’s 39% versus 32%. Given Phase 2 enrollment criteria differences, we view OHR-102 as at least as good as Fovista and note the enormous valuation differential. Detailed Phase 2 results will be at ARVO in early May. To allow for Ohr to fully analyze Phase 2 and determine optimal Phase 3 entry criteria, we project Phase 3 initiation in 2H15, a 3-6 month delay from the originally anticipated 2Q15 start.” 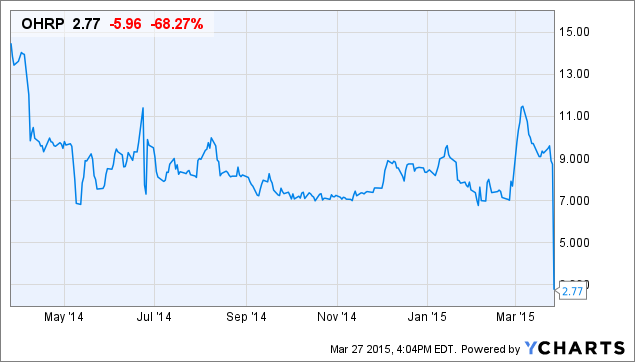