Analyst Mike Burton of Brean Capital released a research note today on Himax Technologies, Inc. (NASDAQ:HIMX), following last week’s release of the company’s first quarter earnings report. The analyst maintained a Hold rating on the stock,  and did not provide a price target. Shares of HIMX are currently trading at $6.62, up $0.30, or 4.75%.

Burton commented, “We are updating our model on Himax (HIMX) following their earnings report last week. HIMX reported Q1 results roughly in line with the Street but guided Q2 well below the Street consensus due to continued weakness at HIMX’s China mobile OEM customers, along with a slowdown in notebooks and weaker 4K TV shipments.”

Furthermore, “Weakness Continues in 2Q: Revenues came in at the low end of Company guidance, down 21.2% sequentially to $179M. Revenues in the Company’s small/mid-sized driver IC segment declined 24% Q/Q as 1) HIMX’s mobile customer base was outcompeted by Apple Inc. (NASDAQ:AAPL), 2) Samsung switched to AMOLED displays, and 3) China OEM exports declined due to RMB appreciation. Large-sized DDI revenues declined 12% Q/Q on well-known weakness in notebooks and light 4K TV shipments. Finally, non-driver products declined 27%, as the segment is also exposed to the smartphone and tablet end markets.” 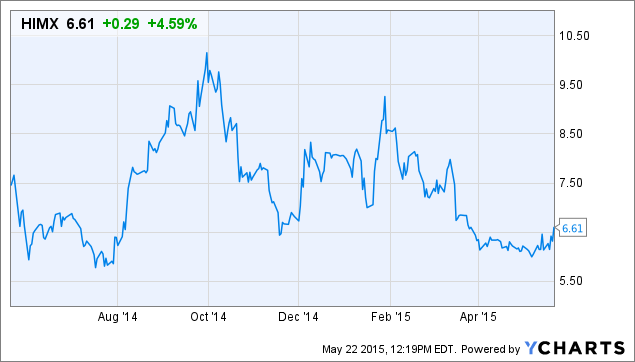