In a research report sent to investors this morning, Brean Capital analyst Lucas Pipes reiterated a Sell rating on Cliffs Natural Resources (NYSE:CLF) with a $6.00 price target, following the company’s fourth-quarter results, posting a net loss of $1.3 billion, compared to a net income of $30.5 million in the year-ago quarter.

Pipes wrote, “Against our segment forecasts, APIO and USIO beat mostly on lower costs, surpassing our segment estimates by $43 million in total. Cliffs provided firm 2015 cash cost guidance in line with prior Q3 earnings conference call commentary. We believe that the lower APIO cost guidance could be largely a function of the depreciation of the AUD versus the USD. 2015 USIO and APIO revenue guidance was provided on a sliding scale against Platts IODEX. Against a prior November sliding scale for USIO revenues per ton, yesterday’s guidance appeared approximately $3/lt lower by our estimates.”

Furthermore the analyst said, “The company continued to focus on debt reduction and cash conservation as it right-sizes its current footprint. Little more was elaborated on the company’s next steps following its last decision on Bloom Lake on January 27th, but we expect Cliffs to elaborate on this point on its conference call later this morning. Further topics to be discussed are likely to be sustainable measures of cash cost cutting and domestic sales strategy.” 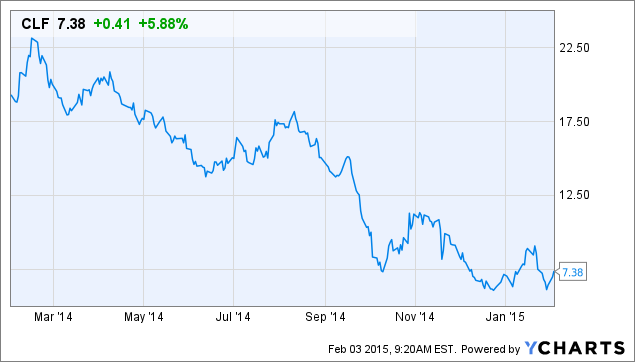