In a research report published Wednesday, Brean Capital analyst Jonathan Aschoff reiterated a Buy rating on TG Therapeutics Inc (NASDAQ:TGTX) with a $22 price target, which represents a potential upside of 59% from where the stock is currently trading. The report follows recent meetings with TG Therapeutics management.

Aschoff wrote, “We remain very bullish on the prospects for TG-1101 and TGR-1202, and given the differentiation we see with both drugs, reiterate our view that the company is significantly undervalued. The lymphoma space may appear crowded, but potentially offering several viable combination therapies, either entirely proprietary or inclusive of another company’s drug, is an approach that we believe will produce superior results, and thus far TG has managed to avoid creating a drug combination limited by significant overlapping toxicities.”

Furthermore, “The best example of TG averting overlapping toxicity is its triplet therapy (TG-1101/ TGR-1202/ibrutinib), a move viewed by many as risky, but which thus far is effective even in tough to treat patients, as well as initially safe. We believe that the triplet regimen will be able to lead to deeper and longer responses, since there is little room to improve ORR with dual therapy. We believe that TG’s continuous dialogue with the FDA results in proposed clinical trial designs that most often are viewed as acceptable at first pass, resulting in rapid clinical progress.” 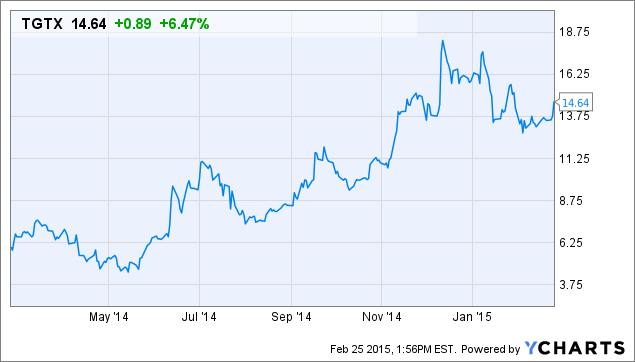