Aschoff commented: “Repros released positive top-line results from the second of its two identical Phase 3 trials comparing Androxal head to head with AndroGel and placebo. As it did in its first Phase 3 trial, ZA-305, Androxal achieved superiority over AndroGel in both co-primary endpoints in ZA-304. Moreover, the efficacy deltas between Androxal and AndroGel were favorably larger in ZA-304 than in ZA-305. We look forward to the long-term safety data in mid-October and a pre-NDA meeting with the FDA by, in our view, the end of November, which should provide more clarity on the FDA’s thoughts about Androxal post the September 17 advisory panel and on secondary hypogonadism in general. Repros will host an Analyst Day on October 31. Four SAEs occurred, two in the Androxal arm, one in the AndroGel arm, and one in the placebo arm, although none of them were deemed drug-related. One patient on Androxal 12.5mg who at entry already had multiple risk factors for stroke (untreated atrial fibrillation, diabetes, obesity and hyperlipidemia), had a fatal ischemic stroke; another patient on Androxal 12.5mg who had a history of alcohol abuse and a recent hospital admission due to an anxiety attack was killed in a motor vehicle accident. A patient on AndroGel with known cardiac disease and stents was found to have coronary artery occlusion on routine follow-up, and was subsequently hospitalized for bypass surgery. A patient on placebo was hospitalized because of intractable vomiting due to gastroenteritis.” 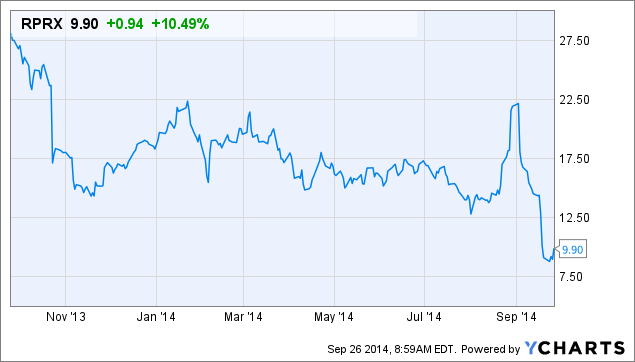