Brean Capital analyst Ananda Baruah weighed in today with a favorable report on Hewlett-Packard Company (NYSE:HPQ), reiterating a Buy rating and a $45 price target, as he continues to believe that there is material opportunity for additional cost savings following the company’s split transaction. As a reminder, the company will spin off its services and software business from its personal computer and printer business to create two separate, publicly traded companies.

Baruah noted, “We continue to believe ongoing cost savings could make for normalized EPS growth beyond the initial split dis-synergy period, which we conservatively assume would mean EPS growth in ’17 (which we believe could be ~$4.25 – $4.50). In conjunction with a strong commitment to capital return both pre-split and post-split (with a heavier emphasis on “HP Inc.”), we believe HPQ stock remains attractive at current levels (~9.5x our ’15 EPS of $3.97). Additionally, we believe HP continued to gain PC share in the Jan Q, which we believe could result in EPS upside to Street of ~$0.03, and potential material FCF upside to Street estimates of $1.6B. Our $45 TP is based on the low end of our “base-case” sum-of-the-parts valuation, which suggests a valuation of $45 – $50.”

According to TipRanks.com, which tracks and ranks financial analysts and bloggers to gauge the performance of their past recommendations, analyst Ananda Baruah has a total average return of 3.7% and a 65.5% success rate. Baruah has a 19.8% average return when recommending HPQ, and is ranked #987 out of 3479 analysts. 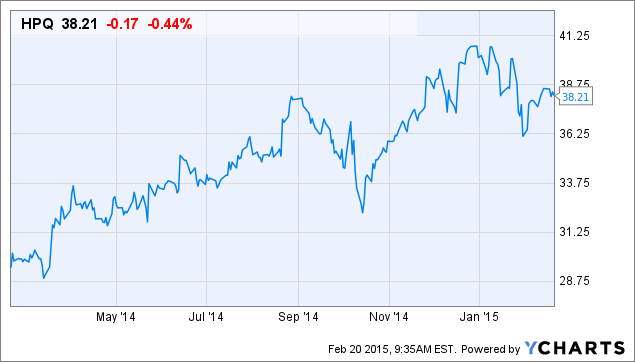