In a research report issued today, Brean Capital analyst Jonathan Aschoff reiterated a Buy rating on Progenics (NASDAQ:PGNX) with a $11 price target, as the company yesterday presented long-term follow-up data on the 41 pheochromocytoma patients treated with Azedra in its pivotal Phase 2 trial.

Aschoff noted, “The data cutoff was June 2014 and follow-up is continuing. About 32% of patients (13/41) achieved the primary endpoint, defined as a reduction of at least 50% of antihypertensive medications for at least six months; disregarding the 6-month minimum response duration, 61% of patients (25/41) achieved a reduction of at least 50% of anti-hypertensive medications for a mean duration of 8.3 months (SD=6.9 months). Also, median survival in all 41 patients was 36.4 months. Patients receiving two doses of Azedra (n=34) had a median survival of 43.3 months; the remaining 7 patients discontinued after receiving one dose of Azedra, but one or two doses is the intended number. Based on RECIST, 32% of patients (12/38) achieved objective PR, and 90% of patients had at least SD. The most common AEs were gastroenterological and hematologic disorders, and thrombocytopenia was the most common drug-related SAE. The 41 patients were enrolled before it was suspended by its former sponsor due to bankruptcy. Progenics will resume the trial in early 2015 and enroll 17 more patients by YE15, with results to support an NDA. Given the positive data seen in the first 41 patients, which would have met the primary endpoint if the SPA specified only 41, we look forward to equally robust data from the next 17 patients.” 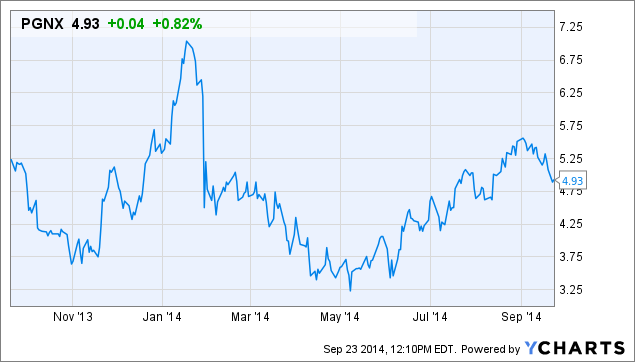