Brean Capital’s healthcare analyst Difei Yang weighed in with her views on Zogenix, Inc. (NASDAQ:ZGNX), after the company released its first-quarter results, posting revenue of $4.6 million compared to consensus of $8.5 million. The analyst reiterated a Buy rating on the stock with a price target of $2.50, which represents a potential upside of 81% from where the stock is currently trading.

Yang noted, “Q1 looks like a miss at first glance, but it is actually not. The company changed reporting on the now sold Zohydro ER. If product revenue was captured the regular way, the top line would have been a small beat. The miss on EPS was somewhat expected as we know the company was going through re-positioning and the fact that expenses came in slightly above expectation is somewhat understandable. Nonetheless, we believe the shares are less correlated with earnings for now. The driving force is the R&D programs in development.”

Bottom line, “Q1 was uneventful except for the fact that the company sold its on-market, but underperforming asset, Zohydro ER, and reduced infrastructure to refocus itself back to an R&D organization. We view the two clinical development programs, ZX008 and Relday, as being lower risk projects. If only one project works, it is more than justifies the current valuation, in our opinion. The new management team has been busy for the past several months and they presented a detailed clinical development timeline with multiple catalysts for its projects.”

According to TipRanks.com, which measures analysts’ and bloggers’ success rate based on how their calls perform, analyst Difei Yang has a total average return of 13.7% and a 55.6% success rate. Yang has a 6.1% average return when recommending ZGNX, and is ranked #564 out of 3602 analysts. 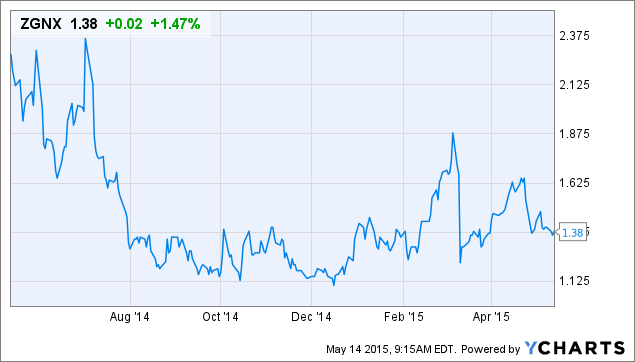