Aschoff wrote, “We remain confident in its US market opportunity. Ex-US, Revestive has launched in Germany and has obtained published pricing in other EU markets that is similar to US pricing. Regarding Natpara, NPS is in active discussions with the FDA regarding its labeling and REMS, and we expect FDA approval by its PDUFA date of January 24, 2015, with a potential requirement for post-marketing commitments. NPS is guiding for a 2Q15 US launch of Natpara and has already hired regional sales directors who are recruiting a total of 50 sales reps to call on endocrinologists and other specialists. NPS reported total revenue of $57 million and EPS of $(0.02), missing consensus of $60 million and $0.01, and NPS ended 3Q14 with cash of $169 million. The company narrowed its full-year 2014 operating expense guidance (excluding the impact of share-based compensation and cost of goods sold) to $185-195 million from $180-200 million.” 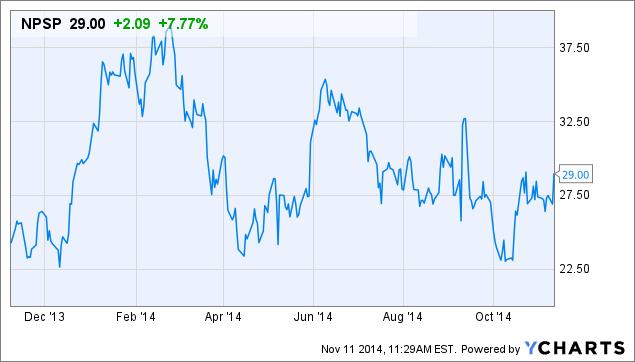