Brean Capital analyst Jonathan Aschoff reiterated a Buy rating on Inovio Pharmaceuticals (NASDAQ:INO) with a $20, following the company’s second-quarter financial results and update on its pipeline.

Aschoff wrote, “After the readout of 36-week data from its Phase 2 trial of VGX-3100 for cervical dysplasia, Inovio is now awaiting the likely 3Q15 readout of 88-week data, and then will conduct an EOP2 meeting with the FDA in 2H15. Inovio expects to then initiate a registrational Phase 3 trial in cervical dysplasia in early 2016. The Phase 2 primary endpoint, histopathological regression of CIN2/3 to CIN1 or no disease at week 36, was achieved in 49.5% patients on VGX-3100 versus 30.6% patients on placebo (p<0.025). We look forward to the publication of more detailed 36-week results, especially immunogenicity data hopefully showing overlap between immune response and clinical benefit. Two Phase 1/2a trials evaluating INO-3112 (a combination of VGX-3100 and an IL-12 therapy) in HPV-positive cervical cancer and head and neck cancer are also ongoing. Inovio also launched a compassionate Phase 1 trial of INO-3106 alone or in combination with an IL-12 therapy in patients with HPV-6 associated aerodigestive cancer who have exhausted other treatment options (chemotherapy, radiation and surgery).” 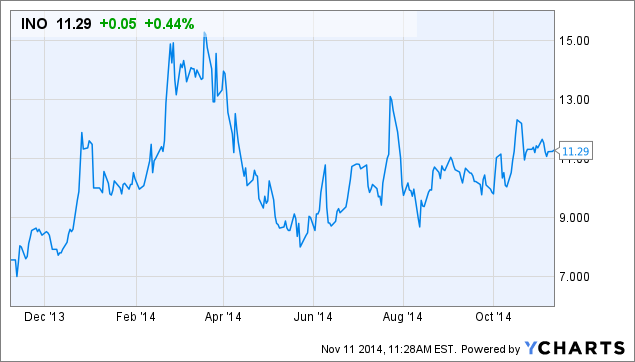