Brean Capital analyst Jonathan Aschoff reiterated a Buy rating on Celldex Therapeutics (NASDAQ:CLDX) with a price target of $35.00, following the company’s third-quarter financial results and update on its pipeline.

Aschoff wrote, “Celldex fully enrolled 700 newly diagnosed glioblastoma patients in its Phase 3 ACT IV trial of rindopepimut. Additional data from the Phase 2 ReACT trial for recurrent GBM will be presented at the SNO meeting in mid-November. Regarding CDX-011 (glembatumumab vedotin), Celldex is amending the protocol for its ongoing METRIC trial for TNBC with GPNMB over-expression and will expand the trial into the EU. Celldex will include a broader TNBC patient population, and the primary endpoint will be PFS alone instead of PFS and ORR. Full enrollment of 300 patients is now expected in 2016. A Phase 2 trial for metastatic melanoma will start by YE14 and Phase 2 for squamous cell lung cancer will start in late 2014 or early 2015. The Phase 1 trial of single agent varlilumab is well under way, and combination trials with varlilumab are expected to start later this year or next year. Celldex ended 3Q14 with a healthy $224 million in cash and investments, which should be sufficient funds through 2016.” 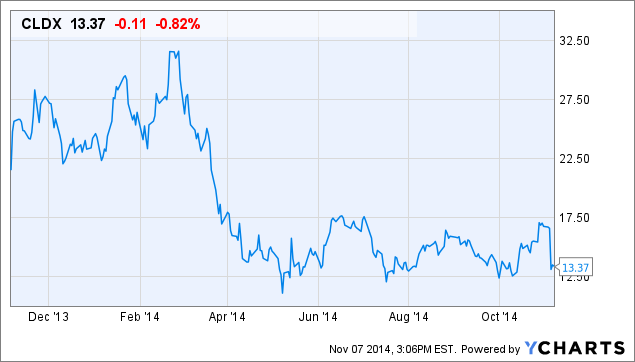