In a research report issued today, Brean Capital analyst Todd Mitchell reiterated a Buy rating on Comcast Corporation (NASDAQ:CMCSA) with a price target of $65.00, after the company reported solid fourth-quarter results that capped off a strong year for the company.

Mitchell wrote, “Comcast appears to have opened up a competitive differential with its Xfinity video offering progressively stemming subscriber losses. It added over one million residential HSD RGU for the 9th year in a row, and Business Services has become a multibillion dollar growth business for the company. Management reiterated its confidence that it would receive approval for its acquisition of TWC by mid-2Q15, and in a gesture to shareholders that it understands their apprehension, reminding them of its plans to buy back $4.5 billion once the deal closes, and backstopped its stock by authorizing a $10 billion buyback, which it would presumably pull the trigger on if the deal falls apart.”

Furthermore, “Suppliers were similarly reassured with promises of still higher capital investment levels in 2015. We can only think that a company which so adroitly manages its constituencies has made the right concessions behind the scenes that the deal will get done. As we have written before, we believe the deal will create tremendous value on multiple fronts for shareholders.” 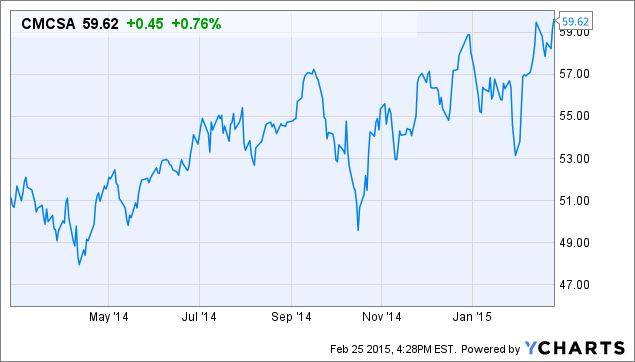