In a research report issued today, Brean Capital analyst Jonathan Aschoff reiterated a Buy rating on shares of TG Therapeutics Inc (NASDAQ:TGTX) with a $28 price target, after the company announced that a Special Protocol Assessment has been approved by the FDA for the first Phase 3 trial of its proprietary combination of TG-1101 and TGR-1202 (referred to as TG-1303) for the treatment of CLL.

Aschoff wrote, “TG will enroll its first patient for the UNITY-CLL trial imminently, and we believe that TG-1303 will prove safe and effective in front-line and relapsed/refractory CLL. Exactly how TG was going to design a trial to more expeditiously develop TG-1303 was an unknown until today, and the clarity afforded by the SPA is a major positive, in our view.”

Furthermore, “We look forward to ASH 2015, as the next major clinical data catalyst for TG, particularly with its non-chemotherapy tripledrug combination TG-1303 plus ibrutinib), and to the imminent start of new triple-regimen trials, particularly with TG-1101, TGR-1202 and a PD-1 inhibitor, as well as with potential quad combination therapy. We are also expecting Phase 3 GENUINE trial data in 2H16, and the company’s expansion into autoimmune disease, particularly MS.”

Bottom line: “We maintain our confidence in TG’s continued rapid progress through the clinic and emphasize the importance of owning assets that if approved, should allow the company to afford patients a combination therapy at a very competitive price vs. the purchase of both activities from two different sources, which is important to payers given the extended duration of lymphoma treatment vs. other more aggressive cancers.” 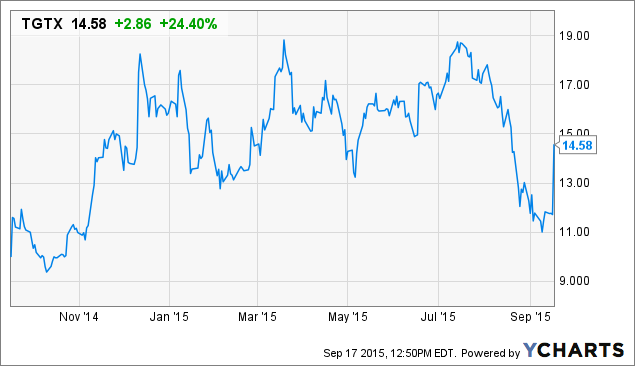