In a research report published today, Brean Capital analyst Jonathan Aschoff reaffirmed a Buy rating on TG Therapeutics (NASDAQ:TGTX) with a $22 price target, as updated data from the company’s TG-1101 plus ibrutinib trial, the TG-1101 plus TGR-1202 trial, as well as the TG-1202 single agent trial became available.

Aschoff observed, “The addition of TG-1101 generates earlier clinical responses than historically seen with ibrutinib monotherapy. The ORR was 94% in all CLL patients and was 100% in high risk CLL patients having both 17p and 11q del, with responses attained rapidly (median time was 8 weeks to response). Among the 8 high risk CLL patients, there were 1 CR and 7 PRs. The ORR was 83% in MCL patients, which was achieved at first efficacy assessment (prior to cycle 3), and further improved by the second efficacy assessment (prior to cycle 6). TG-1101 appears to control ibrutinib related lymphocytosis with more than half of the patients within the normal range for ALC by first efficacy assessment. As of August, 21 patients were enrolled with efficacy data in 15 (5 CLL and 10 NHL) and safety data in all 21 (8 CLL and 13 NHL) available. We expect TG to present data in at least 30 CLL and NHL patients on this regimen at ASH. ORR in CLL and NHL remained the same as what was presented in July. Four of the 5 CLL/SLL patients and 2 of the 10 NHL patients achieved a PR, and 80% of all 15 had reduced tumor burden at first assessment. No new DLTs and no events of TGR-1202 related hepatotoxicity were reported.” 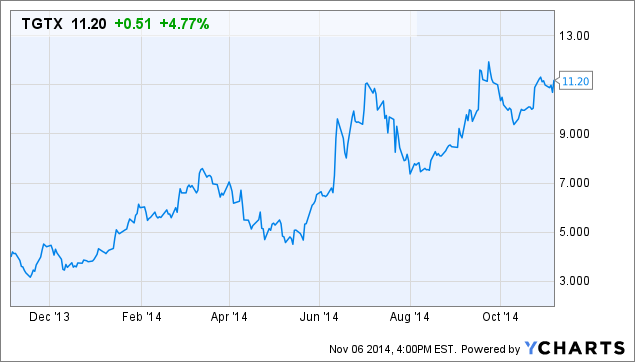