In a research report issued today, Brean Capital analyst Jonathan Aschoff maintained a Buy rating on TG Therapeutics (NASDAQ:TGTX) and raised his price target to $22 (from $19), following the recent news that the company exclusively acquired the full (excluding India) rights to TGR-1202 from Rhizen Pharmaceuticals.

Aschoff observed, “The move was, in our view, clearly due to the similar efficacy seen thus far but with only QD dosing, the lack of hepatotoxicity, and the more benign toxicity profile in general, versus peer PI3K delta inhibitors, as well as the success with the drug’s micronization. The drug has been progressing rapidly through the clinic, much like TG-1101 after TG took control of it, and we believe that it too will be eventually awarded an SPA in combination with TG-1101. Last week TG achieved an important SPA with the FDA regarding its first Phase 3 trial for TG-1101 plus ibrutinib. This differentiated SPA dictates a primary endpoint of ORR to support accelerated approval for TG-1101, an endpoint that can be achieved quickly and which is important to have. We look forward to data from more than 30 Phase 2 CLL patients at ASH taking TG-1101 and ibrutinib, as well as data from about 30 patients taking TG-1101 and TGR-1202.” 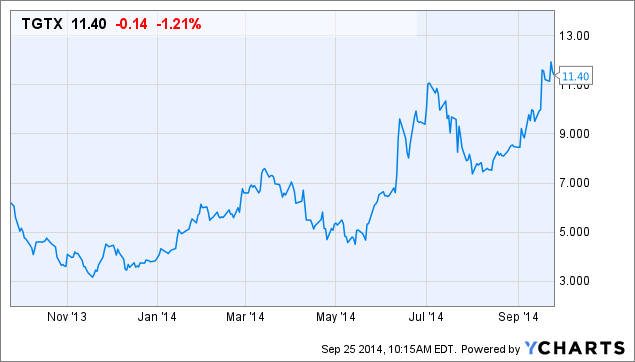