Brean Capital’s healthcare analyst Jonathan Aschoff weighed in with some commentary on Neuralstem, Inc.(NASDAQ:CUR), after the biotech company released its second-quarter results and provided updates on its lead candidates. The analyst rates CUR a Buy with an $8.00 price target, which represents a potential upside of 511% from where the stock is currently trading.

Aschoff wrote, “Neuralstem ended 2Q15 with about $23.7 million in cash, which should fund the company into 2016. The U.S. District Court of Maryland dismissed StemCells’ patent infringement case with prejudice in a case against Neuralstem, in favor of Neuralstem. The judge characterized StemCells’ patents as unenforceable. This is an important development because StemCells would have otherwise been a direct cell therapy competitor.”

“Neuralstem is finalizing its regulatory and clinical plans to initiate a 200-patient multi-site Phase 2 trial with NSI-189 for MDD, which is expected to start in 2H15, following positive top-line Phase 1b data with NSI-189 for MDD from 2014. A larger Phase 2 efficacy trial with NSI-566 for ALS will start by YE15, and we expect a more thorough analysis of the last ALS trial results to also come by YE15. We expect Neuralstem to adopt an enriched enrollment and to recruit healthier patients that are more likely to benefit from NSI-566 therapy. We estimate that the refined patient population in the trial will still represent a majority of the 5,600 newly diagnosed patients.”, the analyst added.

Out of the 5 analysts polled by TipRanks, 3 rate Neuralstem stock a Buy, 1 rates the stock a Hold and 1 recommends Sell. With a return potential of 324.6%, the stock’s consensus target price stands at $5.56. 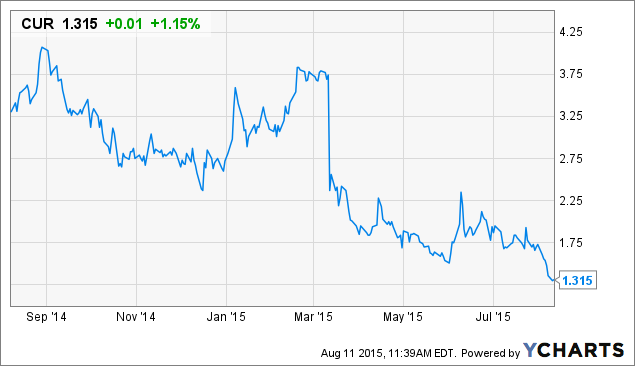