Brean Capital analyst Jonathan Aschoff came out today with a few insights on Cytosorbents Corp (NASDAQ:CTSO), after the company released its first-quarter results last week. The company posted revenue and EPS of $0.7 million and $(0.19), compared to consensus estimate of $0.9 million and $(0.11), respectively. Cytosorbents shares are currently trading at $6.77, down $1.63 or 9.62 percent

Aschoff noted, “CytoSorbents ended 1Q15 with $13.4 million in cash and investments, including net proceeds of $9.4 million from a registered stock offering in January 2015 to fund its planned pivotal trials in the US and/or Germany and expand its production capacity. We expect the company to have sufficient cash to support its operations into 2016.”

Furthermore, “CytoSorbents is actively working with KOLs as well as practicing physicians in its direct territories of Germany, Austria and Switzerland. Following the restructuring of its direct sales force, CytoSorbents recently added two well-qualified sales reps that will start at the beginning of 3Q15, and the company is in the process of hiring two additional sales reps and a medical liaison. We believe direct sales will start to normalize in 3Q15.”

The analyst rates CTO a Buy with a price target of $25.00, which implies an upside of 257% from current levels. 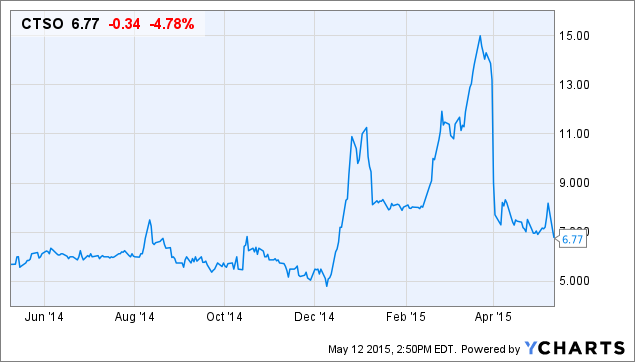